First of all, then, I urge that supplications, prayers, intercessions, and thanksgivings be made for all people, for kings and all who are in high positions, that we may lead a peaceful and quiet life, godly and dignified in every way. (1 Timothy 2:1-2) 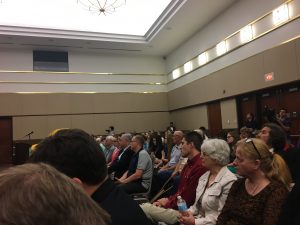 Prior to the hearing the GLJC filed a Public Comment with the Commission on behalf of State legislators responding to the activists. Both Professor Wagner and David Kallman then presented powerful testimony before the Commission and a packed hearing room. Their persuasive testimony and GLJC’s comment made clear that legislative authority resides solely in the State Legislature pursuant to Michigan’s Constitution.

Whether one supports or opposes amending Michigan’s CRA to provide special protection for new classifications of people, it is the legislature and not the Commission, that holds the power to do so.  Indeed, nothing in Michigan’s Constitution or our statutory law authorizes the Commission to either make new law in this area or try to enforce such “laws” under the guise of an interpretive statement.  On behalf of the State legislators, the Justice Center calls on the Commission to decline to unconstitutionally exercise legislative authority reserved solely to the Legislature. 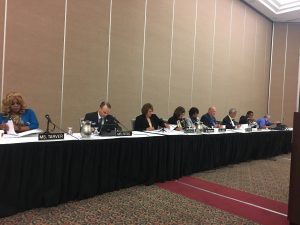 The activists incorrectly claimed the Commission had the legal authority under both state and federal law to add the new categories to the CRA. It also misleadingly claimed that such an interpretive statement would provide special legal protection and remedies for the LGBT community (read: LGBT plaintiffs suing Christian businesses). The GLJC presented a simple review of the law demonstrating the untrustworthiness of the activist’s claims.

The Commission is not the Legislature and is not politically accountable to the people. Under Michigan law an interpretive statement issued by the Commission is not binding law, and cannot, therefore, make LGBT discrimination “unlawful in Michigan.”  The Commission cannot legally provide new remedies to alleged victims of discrimination. Moreover, the activists wrongly claimed that federal court interpretations of the Title VII employment discrimination law are relevant, binding and controlling law regarding the CRA. Michigan’s Supreme Court has repeatedly ruled that federal court interpretations of federal law are not binding on its interpretation of the CRA. Moreover, the current position of the Federal Department of Justice is that Title VII does not include sexual orientation or gender identity as protected classes, rather, “the word ‘sex’ means biologically male or female.” Additionally, the Michigan Legislature considered and rejected legislation eleven times since 1999 to add the requested categories to the CRA. The Commission is bound to follow Michigan law. 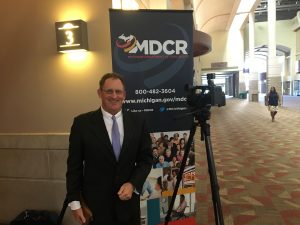 David Kallman, Senior Counsel for the GLJC said: “The Commission must reject the activist’s invitation to ‘interpret’ Michigan law to mean something our legislature explicitly rejects.” Professor Wagner, President of the GLJC, added: “Even if the Commission agrees with the request, the Commission has the constitutional duty to enforce the laws passed by the legislature, not make up its own laws.  We must not permit the Commission to usurp the Rule of Law and the Legislature’s constitutional role as our politically accountable body. Any attempt to enact and enforce such legislation under the guise of an interpretive statement will be rejected as unlawful by our courts.”

While the Commission’s decision is a great victory for good governance and religious conscience, Christian people must be ever vigilant.  In addition to refusing to make the change requested, the Commission asked for an official opinion from the Attorney General — suggesting that they might revisit the matter again someday.